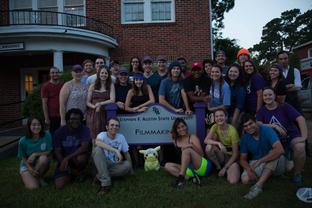 Written, directed and produced by Dudley May, Summer Feature: A History of SFA Student Productions was the winner of the 2020 NacFilmFest Documentary Film Competition. It tells the history of the Feature Film Program at Stephen F. Austin State University's Film School. The story is told through the perceptive of former student directors and writers.

The film, made in 2018, was May's Master of Fine Arts degree thesis and tells how this documentary came into existence, the process he went through to film and edit the interviews featured in the final film. It also details the process of discovering the theme of the film, from the initial concept through post-production.