Ruth Buzzi is an actress, comedian and singer who has appeared onstage, as well as in films and television. She is best known for her performances on the comedy-variety show Rowan & Martin's Laugh-In from 1968–73, for which she won a Golden Globe Award and received five Emmy nominations.

Raised in Connecticut, she enrolled at the Pasadena Playhouse for the Performing Arts at the age of 17. Among her classmates were Dustin Hoffman and Gene Hackman. She graduated with honors. Ruth went on to act in a wide variety of revues throughout New England, and worked alongside other young and talented performers who were just beginning their careers at the time. Including the legendary Barbra Streisand, Joan Rivers, Dom DeLuise, Bernadette Peters and Carol Burnett.

She was hired by Bob Fosse to perform in his then wife Gwen Verdon's hit Broadway musical Sweet Charity. During that time, she auditioned for and received a permanent place in Rowan & Martin's Laugh-In (1967), on which she played everything from deadpan old woman, to hard-bitten drunks, to southern belles to hookers. Memorable characters include Busy-Buzzi, a Hollywood gossip columnist; Doris Sidebottom, the hard-bitten drunk; and a stewardess (teaming up with Debbie Reynolds).

Over the years, Ruth has appeared in dozens of movies and hundreds of television shows. Most recently, she has appeared in the 2017 SFA summer student film production, Glen’s Gotta Go, which will be shown at this year’s Nacogdoches Film Festival.

She and her husband, Kent, have lived on a cattle and horse ranch near Stephenville, Texas, for the past thirty years. She is a charter member of the Pasadena Playhouse Alumni Association and, in addition to the occasional movie, is active in numerous charities.

Ruth Buzzi & Artie Johnson back in the days of Rowan & Martin's Laugh-In. 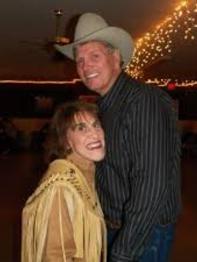 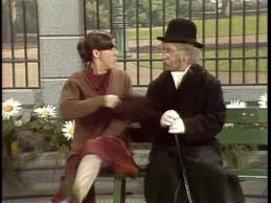