The Nacogdoches Film Festival traces its origins back to 2010, when a small group of individuals from throughout the Nacogdoches community got together for the express purpose of celebrating films made by, or about, Texans.

Our very first film festival was held in April 2012 at the Hotel Fredonia in downtown Nacogdoches and has been held every year since then, shifting to a February time slot back in 2014 in order to work around scheduling conflicts with the Texas National art competition and exposition.

The upcoming 2021 Nacogdoches Film Festival will be our 10th annual event.

A brief summary of each of our previous festivals is catalogued below: 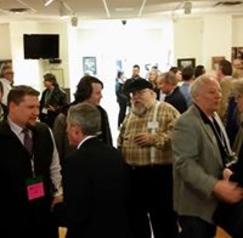 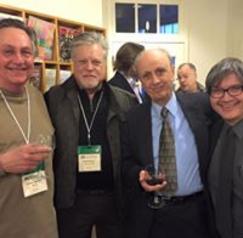 George R. R. Martin, author of GAME OF THRONES, was the headline guest at our 2015 Film Festival.

Bill Arscott (third from left) is the founder and longtime head of the SFASU Film Program. Pictured here, from left to right, are Levie Isaacks, A.S.C., Brad Maule, Bill Arscott, and Herb Midgley.