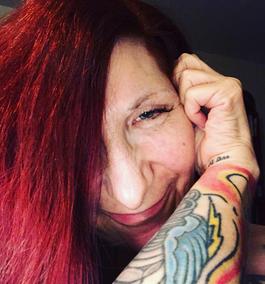 Hansi Oppenheimer is an independent filmmaker from NYC. Her work focuses on fandom, pop culture and creative subcultures. She has been making low to no budget documentaries for almost twenty years, including the feature, Color Me Obsessed: A Film About The Replacements. Her web series Squee! is about women and fandom and has screened at dozens of festivals, winning numerous awards. Her short documentary, Squee Fu: Fans Celebrate the Return of Joe Bob Briggs, was recently selected as Best Documentary at this year’s ScareFest.

Her brainchild The Squee Project functions as a collective of female-identifying creators supporting and promoting each other’s work. Last year, Oppenheimer produced the first SqueeCon at the Lyric Theater in New Haven, which featured films by female identifying creators, performances, panels and nerd karaoke. She frequently brings events, panels and screenings to conventions, libraries and classrooms to celebrate pop culture and the female gaze.

With a background in events and ticketing, she enjoys producing her own screenings and events and is looking forward to taking her latest film, All Hail The Popcorn King, a documentary about iconic East Texas writer Joe R. Lansdale on a four-walling tour in the U.S.

All Hail the Popcorn King premiered to a packed house in Austin, Texas, on August 18th, 2019 and was been invited to screen at George R.R. Martin's Jean Cocteau Theater on October 5th in a special Lansdale-palooza celebration.