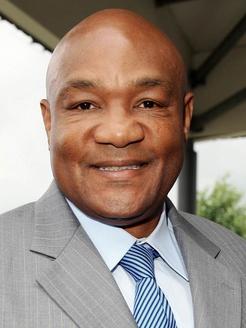 “There was a big element of patriotism in what I did; being in the Olympics, you couldn’t help but love your country more than before,” Foreman said in his autobiography, BY GEORGE.  “But I meant it in a way that was much bigger than ordinary patriotism. It was about identity. An American—that’s who I was. I was waving the flag as much for myself as for the country. I was letting everyone know who I was and, at the same time, saying that I was proud to be an American.”

In 1969, Foreman turned professional boxer and, within two years, he was ranked the No. 1 challenger by the WBA and WBC. By 1972, he had a perfect 37-0 record that included 35 knockouts.

Foreman became a born-again Christian in 1977 and became an ordained minister in 1978. He founded The Church of the Lord Jesus Christ in 1980 and, in 1984, he founded the George Foreman Youth and Community Center. He ultimately retired from boxing in 1997, after compiling an amazing 76-5 career record.

By the end of the decade, George realized his talent for salesmanship, with appearances in infomercials marketing the George Foreman Lean Mean Grilling Machine and promoting Meineke Car Care Centers. He now has a successful line of environmentally safe cleaning products, personal care products, a prescription shoe line for diabetics, a restaurant franchise, in addition to ten books. The list continues to build.

George continues his ministry at The Church of the Lord Jesus Christ, where he preaches four times a week. He also loves spending free time with his family on his ranch in Marshall.