Forty Years of Rocky: The Birth of a Classic

Directed by SFA alum Derek Wayne Johnson, this soon-to-be-released documentary is narrated by Sylvester Stallone and details the making of the original film through his narration of John Avildsen's behind the scenes footage, rehearsal footage and home movies, some of which was used in the film, John G. Avildsen: King of the Underdogs, but a lot that is never before been seen.

Sly handpicked Derek to direct and produce it and the film was recently sold to Metro-Goldwyn-Mayer for release on their cable and streaming channel, Epix. It will also soon be on airlines and digital download.  OFFICIAL TRAILER. 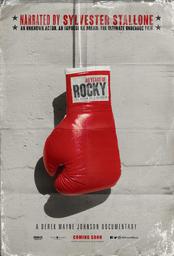