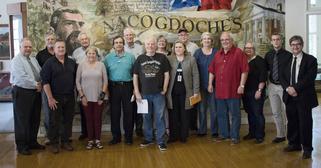 All members of the Nacogdoches Art Alliance and the Film Festival are volunteers who receive no financial compensation for their efforts. All proceeds, after festival expenses, go toward scholarships and the annual student feature film project.

The mission of the Nacogdoches Art Alliance/Film Festival is to celebrate the art of film making by organizing and conducting an annual film festival in Nacogdoches featuring Texas-produced films, films shot on location in Texas, and films with an historical tie to Nacogdoches and rural east Texas; as well as to help develop and nurture the future of film making in all media platforms.

Our History
The Nacogdoches Film Festival traces its origins back to 2010, when a small group of individuals from throughout the Nacogdoches community got together for the express purpose of celebrating films made by, or about, Texans.

Our very first film festival was held in April 2012 at the Hotel Fredonia in downtown Nacogdoches and has been held every year since then, shifting to a February timeslot back in 2014 in order to work around scheduling conflicts with the Texas National art competition and exposition. The upcoming 2018 Nacogdoches Film Festival will be our seventh annual event.

An important element of the Film Festival has been the Short Film competition, in which hundreds of filmmakers have submitted entries through our FilmFreeway portal. We now offer three separate competition categories: one for Short Films, one for Independent Feature Films, and one for budding High School filmmakers.

While focusing our attention primarily on emerging filmmakers, we have had our share of well-known guests, such as George R.R. Martin (author of the Game of Thrones series), Charlaine Harris (author of the True Blood series), and two-time Academy award nominated screenwriter and director, Al Reinert.

Previous Festivals
Interested in our past screenings and guests? Our previous festivals are catalogued here:

Board of Directors
The Nacogdoches Art Alliance (aka Nacogdoches Film Festival) is an IRS-approved 501(c)3 non-profit organization whose goal is to raise scholarship money for film students attending Stephen F. Austin State University, as well as to provide financial support for the SFASU Film program’s annual Summer Feature Film project, where students experience firsthand the making of a full length feature film.

The Nacogdoches Art Alliance is governed by a 10-member Board of Directors.

The following individuals are members of the Film Festival Committee: