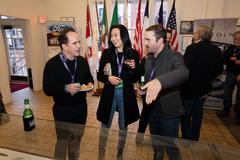 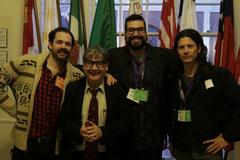 The 2019 Nacogdoches Film Festival was held on February 21-23, 2019 at the historic Fredonia Hotel in downtown Nacogdoches, Texas.

FILMS
The following films were featured during the 2019 NacFilmFest:

Winner of 2019 NacFilmFest SHORT FILM competition, directed by Jacob Sizemore, who was in attendance.

Award-winning documentary directed by Derek Wayne Johnson, who was in attendance.

ARSCOTT INTERVIEW SERIES
This year's theme was "Three Generations of SFA Filmmakers," as we presented an informal interview with award-winning documentary film director and SFA graduate Derek Wayne Johnson and producer (and SFA graduate) Chris May.

The Arscott Interview is an informal interview in a format similar to James Lipton's iconic "Inside the Actor's Studio." Longtime Hollywood actor, SFA graduate and current SFA faculty member Brad Maule conducted the interview, which is named in honor of SFA Film Program's Bill Arscott.

A Lifetime in Comedy — a retrospective look at the life and career of award-winning comedienne and national treasure, Texas' own Ruth Buzzi, emceed by our very own Brad Maule, who will be interviewing Ruth and her husband, Kent Perkins on stage, interspersed with short film clips from Ruth's long history in show business.

INDUSTRY GUESTS
Gopal Bidari — sound engineer, award-winning filmmaker, and performer from Austin, Texas who took to music, media, and fine arts at a young age. His work has screened all over the world, on television, and in competition at prestigious film festivals such as Cannes and Sundance. His film, Pigeon Impossible, made Roger Ebert’s list of best short films of all time and has been adapted into the feature film, Spies in Disguise, starring Will Smith.

Dave Brichler — currently a Paralegal for the firm, Wilson Elser Moskowitz Edelman & Dicker LLP, working since 2017 alongside his longtime colleague, Larry Waks. Prior to that, Dave worked in Austin under the leadership of legendary manager, record producer and music publisher, Bill Ham, from 1990 to 2016 as Director of Operations and Marketing for Lone Wolf Management Co.

Ruth Buzzi — Actress & comedienne Ruth Buzzi's initial big break came as a cast member on Rowan & Martin's Laugh-In. Over the past half century, she has appeared on television and film with most of Hollywood's legends (who can say the same thing about Ruth).

David Blue Garcia — is an Emmy award-winning Director / DP based in Austin, Texas. He has directed everything from national TV spots to hundreds of product, web and branded content commercials. In 2018 David released his feature length directorial debut, Tejano, about a young man’s desperate deal with a Mexican cartel. Tejano won the Audience Award at the Dallas International Film Festival.

Derek Wayne Johnson — Award-winning director of documentary films, as well as a graduate of the SFA Film Program. In 2017, he directed and produced a documentary about Academy Award-winning director John G. Avildsen, whose credits include Rocky and The Karate Kid. The film, John G. Avildsen: King of the Underdogs, examines Avildsen’s life, career and films and features interviews with Sylvester Stallone, Ralph Macchio, Martin Scorsese, Talia Shire and Burt Reynolds, among others. Sylvester Stallone asked Derek to direct and produce a documentary on the making of the original Rocky, currently entitled 40 Years of Rocky: The Birth of a Classic, due for release in 2019.

Michael Kruger — began his Hollywood career in 1980 and worked in his first feature film, Stoneboy, with Robert DuVall in 1983. He has worked in many television series, including Dallas, Guns of Paradise, Matlock, and Quantum Leap. As a veteran Hollywood actor, Michael put his career on hold for the pursuit of Jesus Christ, and the rearing of his family. He has now revived his career by producing and starring in the up-and-coming Pureflix original series, Sons of Thunder.

Chris May — a freelance producer living in Hollywood. While interested in movies from an early age, his passion was truly ignited in film school, where he graduated with a BFA in Cinematography from Stephen F. Austin State University. He served as a producer on John G. Avildsen: King of the Underdogs,40 Years of Rocky: The Birth of a Classic, and STALLONE: Frank, That Is.

Kent Perkins — Kent grew up near Fort Worth, Texas and moved to Hollywood after getting a lead role in Columbia Picture’s 1976 film, Drivein. He starred in three TV series in the 1970s and 1980s, including the first Showtime series, Lone Star Bar & Grill. He was in half a dozen other movies, including Any Which Way You Can with Clint Eastwood.  Kent and Ruth have been married since 1978.

Music in Film — Award-winning composer Christopher North discussed his process of composing and scoring for film.

Sound In Film — Gopal Bidari went over how to get the best sound for your film, both on the set and in post-production.

Using a Drone for Filming — SFA faculty members Dr. Buddy Himes, Christopher Talbot, Michael Tubbs, and Dr. David Kulhavy (all experienced drone operators) discussed how to use a drone to get that perfect shot for your film.

Entertainment Law — Larry Waks and Dave Brichler discussed the law as it concerns to filmmaking. Come ask your legal questions about your film projects.

The annual NacFilmFest is always a great opportunity to meet famous people, as Ruth Buzzi discovered to her delight. 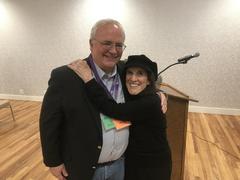 Ruth Buzzi & Kent Perkins being interviewed by Brad Maule during special program, "A Lifetime in Comedy." 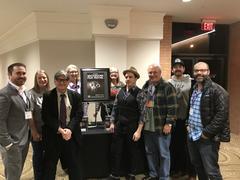 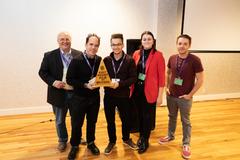 Brad Maule with Tyrone Curl of Tipton Ford Lincoln, one of our major sponsors. 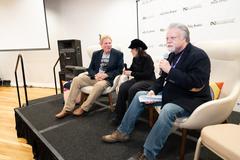 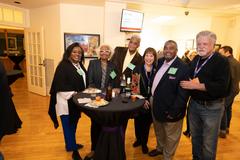 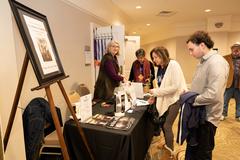