Beasts of the Southern Wild
In a forgotten but defiant bayou community cut off from the rest of the world by a sprawling levee, a six-year-old girl exists on the brink of orphanhood. Buoyed by her childish optimism and extraordinary imagination, she believes that the natural world is in balance with the universe until a fierce storm changes her reality.

Christmas With the Dead
A film based upon a short story by longtime Nacogdoches resident Joe R. Lansdale, that was produced by the Film Department at Stephen F. Austin State University. The film was shot entirely in Nacogdoches and was the 2012 SFA summer student feature film production.

Now Forager
Produced by filmmakers Jason Cortlund and Julia Halperin, both of whom studied filmmaking at the University of Texas.

Bar Talk
Another film based on a short story by longtime Nacogdoches resident Joe R. Lansdale. The film is about a chatty stranger who insists upon striking up a conversation with the man sitting next to him in a dusty Texas bar.

Day 73 With Sarah
A short film written and directed by Brent Hanley of Dallas.

Bernie
A film directed by Richard Linklater from Houston. It is based on a Texas Monthly magazine article, “Midnight in the Garden of East Texas,” that chronicles a murder that took place in the nearby East Texas town of Carthage.

The following is a list of winners in the 2013 Short Film Competition:

Christmas With the Dead Q&A session 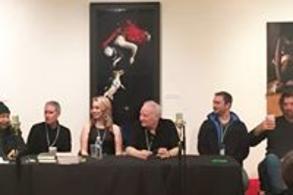