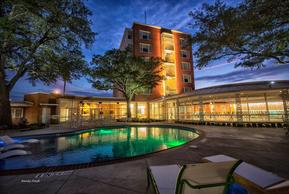 The 2021 NacFilmFest will be held at the iconic Fredonia Hotel in downtown Nacogdoches, Texas. Be sure to make your reservations early.

The NacFilmFest is presented each year by the Nacogdoches Art Alliance, a non-profit organization whose goal is to help nurture the next generation of filmmakers.

Here is the schedule of activities and events for the 2021 NacFilmFest.

Here's how you can help support (sponsor, volunteer, buy tickets, donate) the NacFilmFest and the Nacogdoches Art Alliance.

A significant part of the Film Festival experience is being able to talk with some of the people who helped create the film you just watched.

The NacFilmFest offers a wide variety of opportunities (panel sessions, Q&A following films, etc.) for future filmmakers to learn more about their craft.

Enter your film in any of the following categories: Short Film, and High School Short Film. The DEADLINE for entries is Friday, October 1, 2021.

With deep regret, the board of the Nacogdoches Art Alliance has decided to CANCEL the 2021 Nacogdoches Film Festival.

Join us for the 10th annual Nacogdoches Film Festival on Saturday, October 23, 2021 at the iconic Fredonia Hotel in downtown Nacogdoches, the Oldest Town in Texas.

Normally, the NacFilmFest is held over three days during the final weekend in February, but the COVID-19 situation caused us to postpone the festival until later in the year. The 2021 festival, unlike in years past, will be a one-night event and will feature only short films in the HIGH SCHOOL and OPEN (all others) categories.

Since this year's event will be dramatically slimmed down from our normal offering, attendance at this year's NacFilmFest will be FREE.

In 2022, we hope to return to our normal, three-day event with a full schedule.

This year's NacFilmFest will be FREE of charge.

As part of the Festival’s program, we offer a number of interesting panel discussions on Saturday. The topics will be posted at a later date once they have been finalized.